In June 2020, Government Ban on TikTok and not banning PUBG was the funny & relaxing news for PUBG Players. They have made funny Memes on Twitter in reply of Ban on TikTok. Its was just like the PUBG players are making fun out of TikTokers.

PUBG is banned now in India | PUBG is not a Chinese App reason that Govt has not Banned PUBG Mobile Gaming App | PUBG Mobile is South Korea App | Is it Safe to Play PUBG Mobile App?

Dept of Telecommunication (DOT) has banned 59 Chinese App on 29 June 2020. The Popular App Tik Tok, WeChat, ShareIt, Xender, Cam Scanner, UC Browser, Likee, Helo are Banned. But some user are having concern over the PUBG Mobile App. Many users are happy that PUBG is not a Chinese app or Govt has not Banned it because its a Gaming App and don’t have much of user Data.

Many users are asking Why the PUBG Mobile App is not banned? The Free Fire Gaming App (Garena Free Fire: Rampage) is also available on the Play Store and iOS. PUBG Mobile is not banned because of follow reasons:-

But finally, the PUBG is banned. Is it relaxing news for TikTokers.

Reason 1: The PUBG Mobile Game App is developed by PUBG Corporation and Krafton. Both companies are located in South Korea.
Reason 2: The PUBG Mobile App was found safe as per the Cyber Security Team at Dept. of Telecommunication.
Reason 3: There were no complaints registered by the user for Security Concerns.

Some Funny Memes on Not Banning PUBG 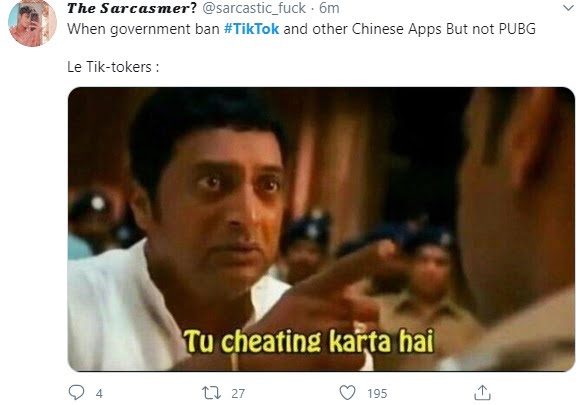 Meanwhile #PUBG players to each other : pic.twitter.com/38ynXbJbJy

Meanwhile #PUBG players to each other : pic.twitter.com/38ynXbJbJy